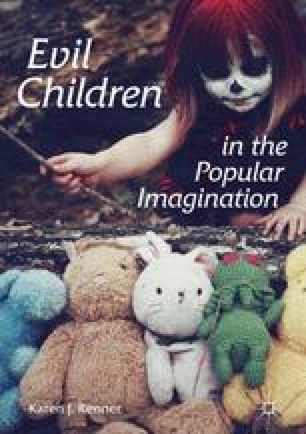 Evil Children in the Popular Imagination pp 95-125 | Cite as

Once linked to prophecy and spirituality, possessed children are now evidence of The Child’s vulnerability to corruption. The devil that possesses the child symbolizes “bad” influences, like violent media or a sexualized consumer culture, which take over the children of failed families. The possessions in The Turn of the Screw (1898) and The Exorcist (1971, 1973), for example, occur because the children lack vigilant parents. In contemporary films, like The Last Exorcism (2010), The Possession (2012), and Sinister (2012), it is absent fathers who most adversely affect their children. Though possessed child narratives typically involve girls, the novels A Wrinkle in Time (1962), Chocky (1968), Del-Del (1991) and A Good and Happy Child focus on the possession of boys, but reveal some significant gender differences.

Moral Panic Absent Father Cautionary Tale Consumer Culture Problematic Sexual Behavior
These keywords were added by machine and not by the authors. This process is experimental and the keywords may be updated as the learning algorithm improves.
This is a preview of subscription content, log in to check access.