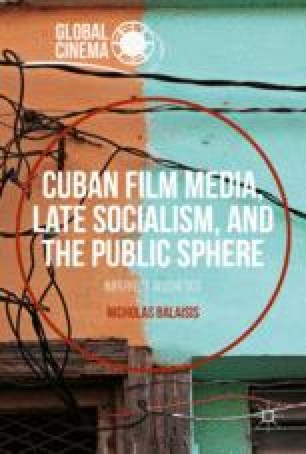 Balaisis examines the resurgence of melodrama in late socialist narrative cinema and maps its role in the Cuban public sphere. Through a close reading of Humberto Solás’s 2001 film Miel para Oshún, Balaisis shows how the melodramatic register allows Solás to negotiate some of the economic challenges and ideological dilemmas of the post-Soviet period such as the rise of global tourism, persistent material shortages, and the Cuban diaspora. Balaisis draws important connections between melodrama as an aesthetic mode and its role as ideological refuge to the Cuban spectator. Balaisis situates Oshún within the international film festival circuit through which it circulated globally, arguing that the shift towards the interior landscape of emotion is in part a response to the geopolitical vacuum left by the wake of the Soviet collapse and the emergence of a singular cultural power: the United States.

Public Sphere Special Period Film Festival Ideological Offensive Cuban Revolution
These keywords were added by machine and not by the authors. This process is experimental and the keywords may be updated as the learning algorithm improves.
This is a preview of subscription content, log in to check access.