Neoliberalization, Universities and the Public Intellectual 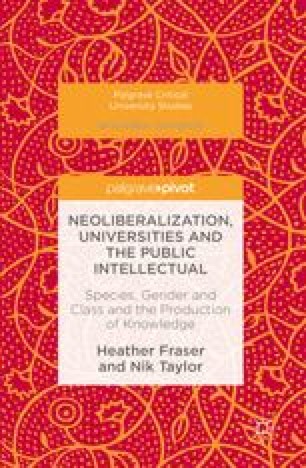 Neoliberalization, Universities and the Public Intellectual pp 43-59 | Cite as

Connecting with Others at the Margins: Researching Women, Companion Animals, Love, and Loss

While we are critical of the many negative effects of the process of marginalization, particularly its tendency to render important topics trivial, we nevertheless note that solidarity is sometimes produced among people whose topics, methods, and/or theoretical approaches are marginalized. Solidarity, or the collective feeling of unity, can expand our thinking and allow for new connections and inspiration. Illustrative of this is the feminist focus group research we undertook with women about companion animals, love, and loss. It was a qualitative project that explored this complex, emotional, and sociocultural phenomena not easily captured by measurements or numbers.

The women in our focus groups produced emotionally poignant accounts of the close bonds they had with animals. All viewed their companion animals not as ‘pets’ that they ‘owned’ but as closely connected family members. Many of the women conveyed their stories about their love and/or loss of animals with humor and self-deprecation—moves sometimes designed to take the sting out of their more serious messages about animal rights. While we reflect on these issues, we describe how our project was designed as a feminist one that allowed space to hear about interspecies connections without derision and to methodically collect and accurately represent our findings, but still one where we could acknowledge our subjectivities and connect with the women participants over our shared love of companion animals. We consider how such an approach might be used to underpin research that deliberately aims to facilitate connections at the margins, between people and across ideas, methodologies, and epistemologies.

Focus Group Knowledge Production Nonhuman Animal Companion Animal Public Intellectual
These keywords were added by machine and not by the authors. This process is experimental and the keywords may be updated as the learning algorithm improves.
This is a preview of subscription content, log in to check access.