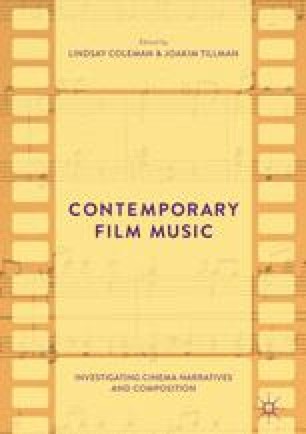 Burwell transcended the limitations of his earliest work in punk and art-rock while retaining its unvarnished simplicity, putting it in the service of a specific dramatic point of view. Whether the source material of one of Burwell’s scores lies in folk music (as it often does), or hymnody (almost as often), or a kind of generalized, rock-based harmony refracted through an orchestral setting (most of the time), they all impart an immediate sense of place and of the varied, complex human relationships that unfold within it.

A Burwell score varies repetitions of a simple yet strongly physical set of musical gestures combined and recombined with image to produce a wide range of emotional and dramatic significations. This chapter follows this process through four Burwell films: Miller’s Crossing (1990); Fargo (1996); Gods and Monsters (1998); and True Grit (2010), with an ear towards a deeper understanding of this process and the expansion of the narrative’s potential, which it represents, revealing aspects of place, time and character that would otherwise remain inaccessible to us.

Motivic Unity Folk Music Acoustical Space Musical Hallucination Musical Material
These keywords were added by machine and not by the authors. This process is experimental and the keywords may be updated as the learning algorithm improves.
This is a preview of subscription content, log in to check access.