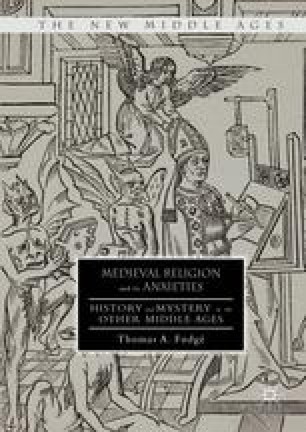 Medieval Religion and its Anxieties pp 89-117 | Cite as

Gargoyles and Glimpses of Forgotten Worlds

On medieval buildings, (both secular and ecclesiastical) one discovers a wide and puzzling array of architectural features which defy simple explanation. The sculptured carvings include Sheela-na-gigs, hunky punks, grotesques, corbels, and gargoyles. Inside churches, one finds roof bosses and misericords. Many of these carvings are obscene, sexually risqué, disorderly, and irreverent. Bernard of Clairvaux opposed them but to no avail. What do these water spouts and other carvings tell us about medieval culture and religion in the Middle Ages? Questions of the demonic, church doctrine, and visual culture are among the explanatory motifs which are explored. Issues of order and disorder are considered as the apparent contradictions between official religion and popular culture are examined.

South Side Thirteenth Century Fifteenth Century Parish Church Gothic Cathedral
These keywords were added by machine and not by the authors. This process is experimental and the keywords may be updated as the learning algorithm improves.
This is a preview of subscription content, log in to check access.