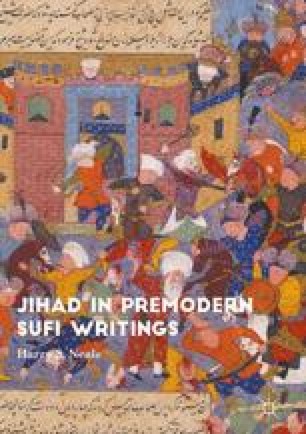 This chapter introduces the thesis that Sufi writings of the premodern period (eleventh to seventeenth centuries CE) do not espouse an exclusively irenic understanding of the Islamic doctrine of jihad; rather, Sufi writings have consistently developed a comprehensive interpretation of jihad as having an inner spiritual aspect and an outer martial aspect. This chapter defines the area of concentration as primarily the eastern Islamic world and the languages of the primary sources studied as Arabic and Persian. It examines the greater jihad hadith and its textual history. It also considers the disparity between scholarship regarding Sufis in European languages and contemporary Sufi scholarship in Arabic. It establishes the methodology of comparing all genres of Sufi writings to accurately distill a premodern Sufi jihad discourse.

European Language Eleventh Century Islamic Society Spiritual Struggle Islamic Culture
These keywords were added by machine and not by the authors. This process is experimental and the keywords may be updated as the learning algorithm improves.
This is a preview of subscription content, log in to check access.