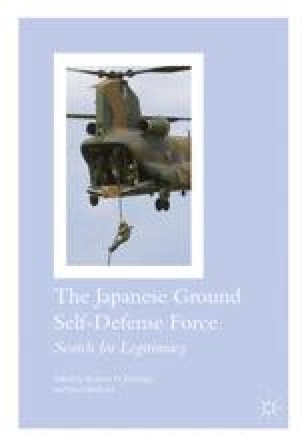 This chapter introduces a period of steady transformation for the Ground Self-Defense Force (GSDF) and increasing transparency by the Japanese government toward modernizing its defense capabilities to meet new challenges amid a rapidly changing domestic political and foreign affairs context. The twenty-five years from 1989 to 2014 have been marked by major developments and changes in international relations, and, in particular, to the security environment in Northeast Asia. While the Cold War is said to have ended in 1989 in Europe, its remnants in East Asia are still very apparent. Moreover, traditional threats in the international arena, represented early on by Iraq’s invasion of Kuwait in the summer of 1990, re-emerged once again, as did civil wars and other state-to-state conflicts, and non-traditional threats and new asymmetric challenges, such as terrorism, have further complicated international society.

Disaster Relief Liberal Democratic Party Ballistic Missile Marine Corps Fukushima Daiichi Nuclear Power Plant
These keywords were added by machine and not by the authors. This process is experimental and the keywords may be updated as the learning algorithm improves.
This is a preview of subscription content, log in to check access.