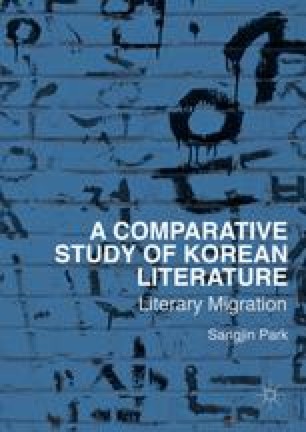 A Comparative Study of Korean Literature pp 121-134 | Cite as

Languages compete when put into the service of nation building. Korean writers under Japanese imperialism such as Yi Kwang-Su (1892–1950) tried to negotiate, resist, and make sense of this new and highly competitive landscape. The collision between multiple national languages may cause an exclusive nationalism. However, if we can hypothesize that the resistance of a national language is not directed to the (language of) outside but rather to all kinds of homogenized (language) space, we can consider that a national language applies resistance to that homogenized space based on nationalism. Yi Kwang-Su’s cosmopolitan, bilingual writing provides an example of the literature that built up such fields beyond both ideas of “Korean” and “modern.”

Chinese Language National Language Chinese Literature Literary Language Japanese Literature
These keywords were added by machine and not by the authors. This process is experimental and the keywords may be updated as the learning algorithm improves.
This is a preview of subscription content, log in to check access.