Indian Literature and the World 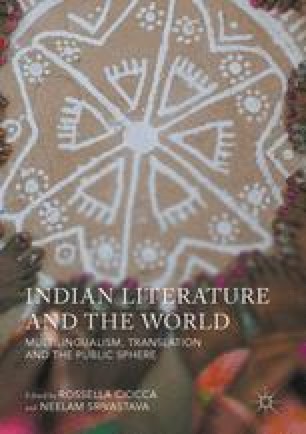 Indian Literature and the World pp 61-85 | Cite as

Every region of India is and has been multilingual, with speakers of different languages and speakers of multiple languages. But literary ‘multilingual locals’ are often more fragmented than we think. While multilingualism suggests interest, and proficiency, in more than one literary language and tradition, very real barriers exist in terms of written vs. oral access, mutual interaction, and social and cultural hierarchies and exclusions. What does it mean to take multilingualism seriously when studying literature? One way, this essay suggests, is to consider works on a similar topic or milieu written in the different languages and compare both their literary sensibilities and their social imaginings. Rural Awadh offers an excellent example, as the site of many intersecting processes and discourses—of shared Hindu-Muslim sociality and culture and Muslim separatism, of nostalgia for a sophisticated culture and critique of zamindari exploitation and socio-economic backwardness, as the home of Urdu and of rustic Awadhi. This essay analyses three novels written at different times about rural Awadh—one set before 1947 and the others in the wake of the Zamindari Abolition Act of 1950 and the migration of so many Muslim zamindars from Awadh, either to Pakistan or to Indian cities. The first is Qazi Abdul Sattar’s Urdu novel Shab gazida (1962), the other two are Shivaprasad Singh’s Alag alag vaitarani (1970) and the Awadh subplot in Vikram Seth’s A Suitable Boy (1993). Without making them representatives of their respective languages, by comparing these three novels I am interested in exploring how they frame and what they select of Awadh culture, how much ground and sensibility they share, and how they fit within broader traditions of ‘village writing’ in Hindi, Urdu, and Indian English.

Corporal Punishment Oral Tradition Local Dialect Tenant Farmer Congress Party
These keywords were added by machine and not by the authors. This process is experimental and the keywords may be updated as the learning algorithm improves.
This is a preview of subscription content, log in to check access.