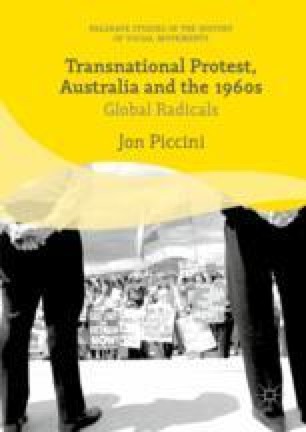 Turning Over Marx and Mao and Intently Lengthening Their Hair: Writing, Debating, and Living the Global

History occurs in spaces, and is shaped by the ideas that flow through them. This chapter employs a range of theoretical approaches to argue that activist understandings of both space and publishing culture underwent significant globalisation during the late 1960s. New social movements established headquarters, bookshops, and meeting places within the private urban environment, while employing a globalised lexicon and political–cultural practice to mobilise and engage with cities and their inhabitants. The way social movements distributed their message was also altered. Political power grew out of the barrel of a Gestetner, as one activist put it, and a plethora of new publications emerged, often aping new styles and forms from around the world. These publications also introduced the globally mobile vocabulary of the Sixties—decolonisation, black and student power, women’s liberation, worker’s control, and the Third World—and played an important role in their initial dissemination and contention.

Gestetner Semper Florens Australian Social Movements Black Power Irregular Students
These keywords were added by machine and not by the authors. This process is experimental and the keywords may be updated as the learning algorithm improves.
This is a preview of subscription content, log in to check access.

Cite this chapter as:
Piccini J. (2016) Turning Over Marx and Mao and Intently Lengthening Their Hair: Writing, Debating, and Living the Global. In: Transnational Protest, Australia and the 1960s. Palgrave Studies in the History of Social Movements. Palgrave Macmillan, London. https://doi.org/10.1057/978-1-137-52914-5_3