The Exclusions of Civilization 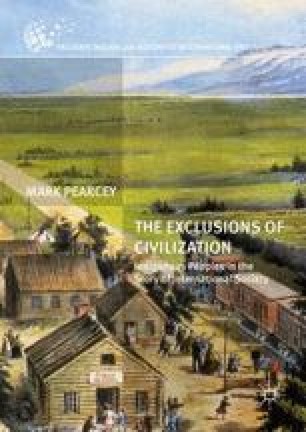 The Exclusions of Civilization pp 77-96 | Cite as

Much has been written about the standard of civilization and its role in defining membership in international society at the beginning of the twentieth century. Much less is known about the role of that standard in precluding indigenous peoples from participation at the international level. Pearcey pays specific attention to that issue through a case study analysis of Chief Levi General’s diplomatic mission to the League of Nations on behalf of the Six Nations, detailing the exclusionary implications of a European discourse on civilization through its crystallization around territorial sovereignty.

International Society Indigenous People Canadian Government Global Space Territorial Sovereignty
These keywords were added by machine and not by the authors. This process is experimental and the keywords may be updated as the learning algorithm improves.

Sections of this chapter originally appeared in: Mark Pearcey, “Sovereignty, Identity, and Indigenous-State Relations at the Beginning of the Twentieth Century: A Case of Exclusion by Inclusion,” International Studies Review 17, no. 3 (2015): 441–454. Section one (The Standard of Civilization and Indigenous Peoples) and section two (Chief Levi General and the League of Nations) have been edited and moderately revised. The introduction and conclusion have been rewritten (though the former retains some/similar content). I would like to thank Wiley again for the permission to reuse this material here.