Wartime Schooling and Education Policy in the Second World War 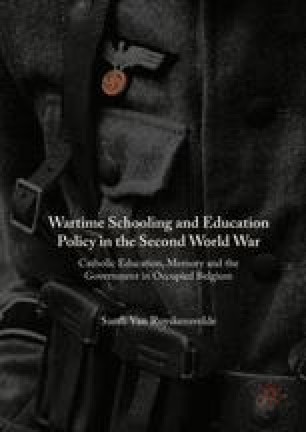 Introduction: A Political History of Belgian Education during the Second World War

On 12 May 1945 two British newspapers published an article by the end of the war in Europe, stating that Belgian education had functioned as a weapon in the hands of the German-occupying regime. According to journalists of the News Chronicle and the Daily Telegraph, the Nazi system had exerted such an influence on children that, after the war, Belgian authorities would have to submit them to a ‘scientific purge’.1 At the opening ceremony of the Birkbeck College in London, even the English Minister of Education, Richard Austen Butler, claimed that Belgian education needed ‘a period of inoculation’. In his view, Belgian children had been the victims of a unilateral procedure of misinformation, since during the occupation ‘the individuality of children had not mattered’.2 Not only this speech, but also the presence of the Belgian Minister of Education at the ceremony was fiercely criticised in Belgium, by Catholics in particular. In a note of 22 May 1945, the Provincial of the Walloon Province of the Society of Jesus, Victor Le Cocq, argued that the speech and articles damaged private and public education and that nothing could support these false allegations. Contrary to the situation in the Grand Duchy of Luxemburg, he argued, collaborators or exponents of the German regime had never replaced Belgian educators.3

School Culture Educational Development School Life Catholic School False Allegation
These keywords were added by machine and not by the authors. This process is experimental and the keywords may be updated as the learning algorithm improves.
This is a preview of subscription content, log in to check access.