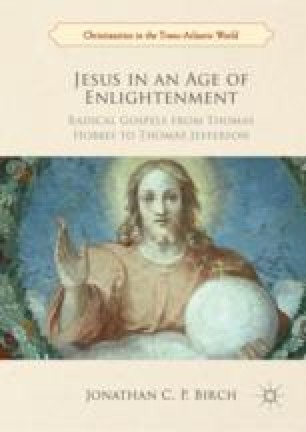 What Would Jesus Tolerate? Reason and Revelation in Spinoza, Locke, and Bayle

In this chapter, the political theology and ethical imperatives which have already been to the fore in this study will narrow in on one of the concrete controversies of the age, touched on repeatedly in the previous chapters: religious toleration. Like Jonathan Israel, I shall compare and contrast the approaches of Benedict de Spinoza, John Locke, and Pierre Bayle. The plausibility of placing these figures in categories of ‘radical’ or ‘moderate’ Enlightenments will be challenged, and the theological dimension of their writings will be emphasised. All three figures drew on the philosophical and biblical traditions of Jewish and Christian thought: Jesus featured prominently in their cases for toleration (especially in Locke and Bayle), and he had a role in all three philosophers articulation of the general relationship between the sacred and the civil dimensions of society (especially in Spinoza and Locke). For all his sympathy with democratic politics, Spinoza’s political theology emerges as the most authoritarian, while Locke (for all the exceptions he makes to toleration) argues for the kind of structural separation of civil and sacred powers which have underpinned secular constitutional arrangements in later modernity. Bayle produced the most passionate and sustained argument against religious intolerance, combining philosophical reason with a commitment to the authority of biblical revelation which is underestimated in some scholarship on this enigmatic figure.