Crime, Criminal Justice, and the Evolving Science of Criminology in South Asia 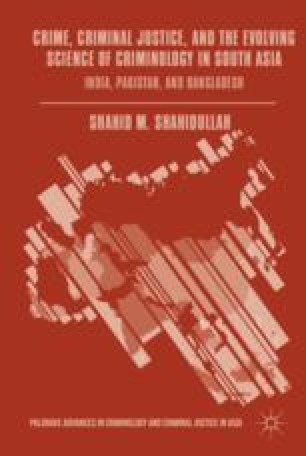 Crime, Criminal Justice, and the Evolving Science of Criminology in South Asia pp 337-358 | Cite as

The Problem of Domestic Violence in India: Advances in Law and the Role of Extra-Legal Institutions

This chapter examines the issues of domestic violence in India. One of this chapter’s key arguments is that the problem of ending domestic violence in a society depends on its cultural perception about the status of women. During the Vedic period in India (1500–500 BCE), men and women were treated equally. Vedic women were educated, able to choose their mates, and held prominent positions. In addition, women distinguished themselves in science and learning, and even participated in philosophical debates and wrote some of the Vedic hymns. From the Smriti period (after 500 BCE), the status of women, however, began to be redefined. In the Smriti period, the most significant lawmaker was Manu. According to Manu, a woman should never be allowed to assert her independence. Girls must be in the custody of their fathers when they are young; women must be in the custody of their husbands after marriage; when a woman is a widow, she must be under the custody of her son. From the days of the Muslim conquest in India, women experienced a further deterioration of status. With the onset of modernization in India from the middle of the twentieth century, women began to be educated and began to enter the modern workforce. From the 1970s, in the context of the United Nations Convention on the Elimination of all Forms of Discrimination against Women (CEDAW) and the spread of the global women’s movement, many new laws to criminalize domestic violence in India were enacted such as the Dowry Prohibition Act of 1986, and the Protection of Women from Domestic Violence Act (PWDVA) of 2005. Many notable nongovernmental organizations (NGOs) on women issues were also established such as Mahila Samakhya Society (education for women’s equality; MSS), Ahmedabad Women’s Action Group (AWAG); International Center for Research for Women, Jagori (awaken women); and Society for Nutrition Education, and Health Action (SNEHA). But the sad and the alarming fact is that even after the enactment of many laws and the birth of many women NGOs, the incidence of domestic and intimate partner violence in India is still on the rise. Modernization that is based on the cultural principle of equality between men and women is still sharply conflicting with the traditional culture of the status of women in India.

Intimate Partner Violence Domestic Violence Child Marriage Wife Beating Section 498A
These keywords were added by machine and not by the authors. This process is experimental and the keywords may be updated as the learning algorithm improves.
This is a preview of subscription content, log in to check access.

Cite this chapter as:
Kethineni S. (2017) The Problem of Domestic Violence in India: Advances in Law and the Role of Extra-Legal Institutions. In: Shahidullah S. (eds) Crime, Criminal Justice, and the Evolving Science of Criminology in South Asia. Palgrave Advances in Criminology and Criminal Justice in Asia. Palgrave Macmillan, London. https://doi.org/10.1057/978-1-137-50750-1_12