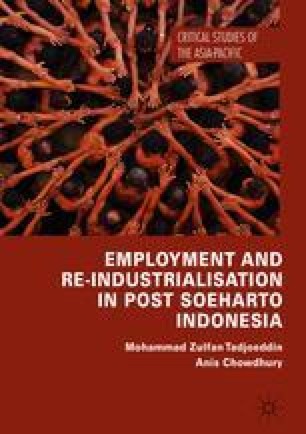 This chapter examines real wage-earnings, productivity and earnings inequality in Indonesia, disaggregated into provinces and economic sectors. It finds that the post-Asian financial crisis (AFC) and democratic Indonesia mimics the global trend of disconnection between wage and productivity growth both across the sectors and provinces, resulting in a growing earnings inequality. This disjoint is most prominent during 2001–2008 but converged in the manufacturing sector since 2008. The productivity-earnings disjoint is more pronounced in the provinces with higher growth rates of provincial real gross domestic product, indicating that better economic performance did not benefit the labour. This disconnection has three consequences. First, it affects income or earnings distribution. The chapter argues that the declining income share of labour, or declining wage-productivity ratio, may help explain the continuous rise in economic inequality in Indonesia since the late 1990s’ AFC. Second, it implies a vicious circle of low-wage economy, instead of a productivity-driven high-wage dynamic trajectory of an economy. Third, it casts doubts about the quality of growth in post-AFC Indonesia. Interestingly, the chapter finds that compliance with minimum wage has an equalising effect. That is, wage-earnings inequality declines with the increase in the minimum wage compliance rate, as this improves labour’s bargaining power.

Real Earnings Growing Earnings Inequality post-Asian Financial Crisis Sakernas Regular Wage Employment
These keywords were added by machine and not by the authors. This process is experimental and the keywords may be updated as the learning algorithm improves.
This is a preview of subscription content, log in to check access.

Cite this chapter as:
Tadjoeddin M.Z., Chowdhury A. (2019) Earnings, Productivity and Inequality. In: Employment and Re-Industrialisation in Post Soeharto Indonesia. Critical Studies of the Asia-Pacific. Palgrave Macmillan, London. https://doi.org/10.1057/978-1-137-50566-8_3