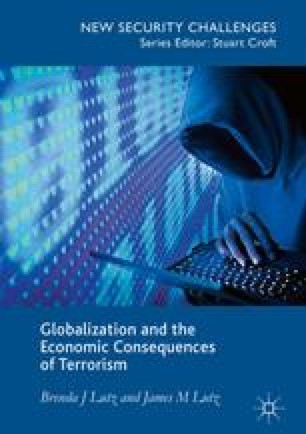 This chapter comprises the countries in South Asia, Southeast Asia, East Asia, and states in Oceania. This region is quite diverse when compared to Latin America and the Middle East. The results show few indications that globalization was linked to more terrorism; in fact, there was evidence that the countries less integrated into the world system had higher per capita levels of terrorism. There are few indications that foreign investment was affected by higher levels of terrorism. There is some evidence that tourist visits were negatively affected in some time periods but the patterns were volatile.

Middle East Terrorist Group Political Violence Criminal Organization Dissident Group
These keywords were added by machine and not by the authors. This process is experimental and the keywords may be updated as the learning algorithm improves.
This is a preview of subscription content, log in to check access.