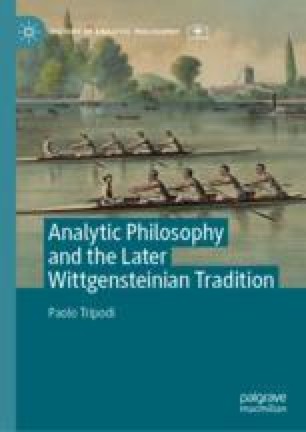 Arguably, in the 1950s and 1960s there were grounds to claim that Quine’s attack on Carnap’s analytic-synthetic distinction could not be automatically applied to Wittgenstein. However, with very few exceptions, the Wittgensteinians did not provide a commensurate response to Quine. Arguably, they were not fully aware of the historically objective conditions that made Quine’s attack so successful and epoch-making, so as to indirectly weaken the Wittgensteinian tradition, which was not his direct polemical target. After the Second World War in the United States, during a huge expansion of higher education, the style and methods of the humanities were modelled on the natural sciences. The chapter presents this process—the so-called new rigourism in the human sciences—by comparing the rise of analytic philosophy in America in the hands of Quine with the transformation of economics in the hands of Paul Samuelson and his neoclassical colleagues. Discussing some issues taken from Winch’s The Idea of a Social Science, the chapter also describes the later Wittgenstein as a strenuous advocate of the autonomy of humanistic understanding, in the old, non-rigourist and not scientific-oriented sense of the term.

Analytic philosophy Neoclassical economics Rigourism in the humanities Wittgenstein Peter Winch RAND corporation Humanistic understanding History of the humanities
This is a preview of subscription content, log in to check access.