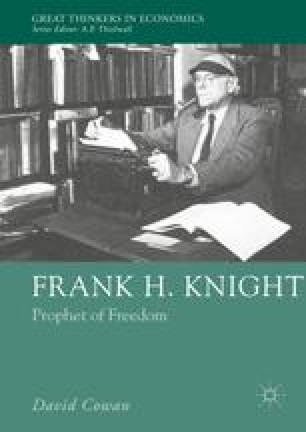 Given issues today, ranging from the continued anti-market view of the world to concerns about a growing rich/poor divide, Knight is a critical dialogue partner in this current climate, because he takes a realistic view whilst recognizing the imperfections, and hence the contradictions, inherent in our economic organization of human beings. After Risk, Uncertainty and Profit, Knight’s core writings were essays and collections of essays, rather than any systematic works or impressive individual volumes. Two of his early and most important collected volumes were The Economic Organization (1933a), published as a volume in 1951 but dating back to 1933 as course material for his students, and The Ethics of Competition (1935a), published in between the course material and the published volume. In these works, Knight explored the market system and its weaknesses, and engaged with socialism and communism as alternatives to capitalism. He was also developing his thought on the role of science in economics and economics itself as a science, along with his interest in ethics, psychology and behaviour. Knight was coming at his economic interest from a variety of angles, and much of what is discussed in this period has its roots in Risk, Uncertainty and Profit, often drilling more deeply into this or that aspect. In this, and the next, chapter we will look chiefly at two major themes which emerged in his early to mid-career works. The two themes are, first, Knight’s understanding of economic organization, and second, the ethical basis of competition. The work undertaken here also provided a Knightian critique of the quest for an alternative, a Knightian view of the overarching concerns that critics of capitalism have entertained since the dawn of capitalism.

Productive Power Price System Consumption Good Productive Service Economic Organization
These keywords were added by machine and not by the authors. This process is experimental and the keywords may be updated as the learning algorithm improves.
This is a preview of subscription content, log in to check access.