Religion, Politics, and Values in Poland 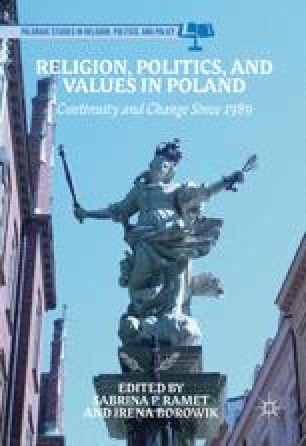 It is difficult to determine and describe the statistics of religious groups in contemporary Poland. As of 1 October 2014, 158 Churches and religious associations were registered in Poland (in the register of the Ministry of Administration and Digitalization). A further 14 Churches and religious associations operated by way of separate statutes; to this number, one must add the Roman Catholic Church, which operates on the basis of an international agreement (concordat). Hence, the total number amounts to 173 (1 + 14 + 158). It is difficult to estimate the number of faith communities and parareligious groups operating in Poland outside the register kept by the Ministry, which have adopted a different legal form (e.g., as associations, foundations, or limited liability companies). Many such groups function as informal or social groups, exercising the right stemming from the general constitutional provision speaking of the freedom of religion.

Religious Association Faith Community Limited Liability Company Religious Minority Religious Movement
These keywords were added by machine and not by the authors. This process is experimental and the keywords may be updated as the learning algorithm improves.
This is a preview of subscription content, log in to check access.