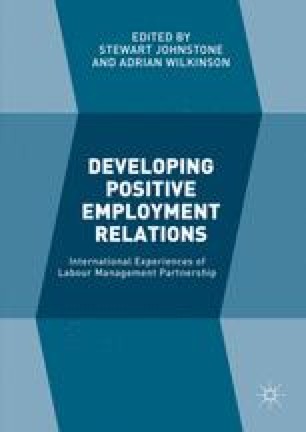 Labour–Management Partnership in the USA: Islands of Success in a Hostile Context

The current context for labor–management partnerships in the USA is unfriendly in almost all ways. Union density, at 11.1 % overall and 6.6 % in the private sector, is at a modern low (US BLS 2015). With few exceptions, there is no significant encouragement of partnerships from either the federal or the state governments. There is no organization or forum that regularly brings together leaders of the labor and business communities for social dialogue about economic or other policies. And many of the “best examples” of partnerships in the last couple of decades have not been sustained. There are still “islands” of success, but they function in spite of the system rather than because of it.

Collective Bargaining Management Committee Management Relation Employee Involvement Public Sector Union
These keywords were added by machine and not by the authors. This process is experimental and the keywords may be updated as the learning algorithm improves.
This is a preview of subscription content, log in to check access.

Portions of this chapter draw on text developed by a team of scholars for an amicus brief that included all three co-authors of this chapter. We have primarily utilised text developed by one of the three co-authors that was not in the final brief due to space limitations. We express our appreciation to the full group, which is as follows: Paul Adler, James Brudney, Margaret Carr, Willard Carr, Marion Crain, Joel Cutcher-Gershenfeld, Kenneth G. Dau-Schmidt, Adrienne E. Eaton, Matthew W. Finkin, Catherine Fisk, Sanford M. Jacoby, Thomas A. Kochan, Wilma Liebman, Martin H. Malin, Robert B. McKersie, Saul A. Rubinstein, and Katherine Stone.

Appendix 1: Publications of the Bureau of Labour–Management Relations and Cooperative Programs, US Department of Labour