Jane Lead and her Transnational Legacy 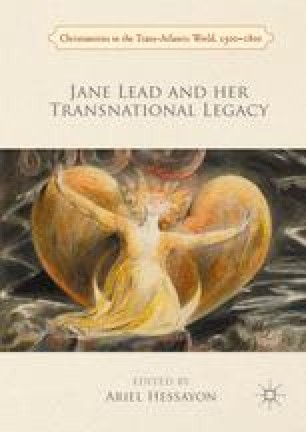 Chapter
Part of the Christianities in the Trans-Atlantic World, 1500-1800 book series (CTAW)

This chapter examines the state of the Philadelphian Society in the aftermath of Jane Lead’s death in 1704. It challenges the centrality of her matriarchal authority and portrays her instead as a controversial, divisive figure among the Philadelphians, whose Society had already collapsed by the time of her death. It shows how the arrival of the Camisards in London in 1706 gave the Philadelphian Society a second life, as both movements merged into the ‘French Prophets’ the following year in celebration of the Union Act. Yet if the Prophets became notorious for their spiritual performances, it is argued that this owed more to the Philadelphians’ influence among them than to their actual French followers. Overall, this chapter concludes that the Philadelphians proved far more radical than hitherto acknowledged and that Lead’s English legacy was almost non-existent.

Cohesive Movement Religious Society Female Ministry Miraculous Cure Public Assembly
These keywords were added by machine and not by the authors. This process is experimental and the keywords may be updated as the learning algorithm improves.
This is a preview of subscription content, log in to check access.