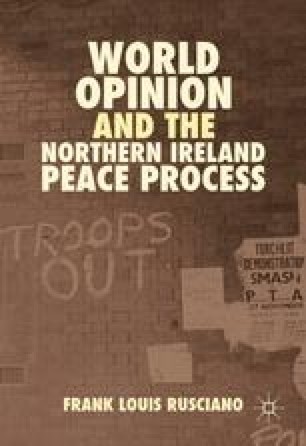 A nagging question lingers about the Good Friday Agreement that ended the Troubles in Northern Ireland: How did the region end 30 years of ethnic and religious violence and terrorism in the midst of two decades in which the world suffered so many instances of these bloody conflicts? Rusciano offers the controversial thesis that one reason had to do with the changes in world opinion that occurred after the end of the Cold War. World opinion created conditions where by Northern Ireland’s international reputation affected its citizens’ sense of identity. This emerging importance of reputation altered the patterns of speech and silencing in the society, and changed what could be expressed by citizens and leaders. Further, the contact between Northern Irish leaders and the international community changed their perception of “the possible” regarding relations between Protestants and Catholics, and Unionists and Republicans. Finally, being part of a new “imagined international community” could continue the process, by allowing citizens of the six counties to create an “imagined community” in Northern Ireland, especially among the younger cohorts.

National Consciousness Peace Process International Image National Pride National Liberation
These keywords were added by machine and not by the authors. This process is experimental and the keywords may be updated as the learning algorithm improves.
This is a preview of subscription content, log in to check access.