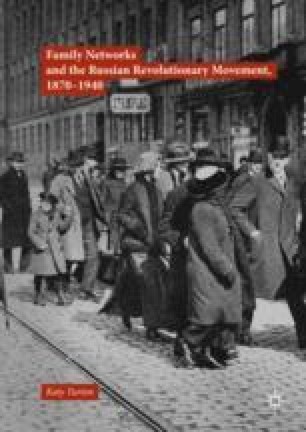 This chapter describes the range of roles which family members took on in the revolutionary movement, including keeping safe houses for revolutionaries, donating money to the cause and providing other forms of material support. It discusses the way in which spouses cooperated closely in leading party cells and the various tasks which parents assigned to their children. It also acknowledges that family concerns at times disrupted revolutionaries’ activities. Combining revolutionary activities with family life and especially parenthood caused difficulties and often helped perpetuate traditional gender roles in a community which was theoretically committed to women’s emancipation and equality. Conversely, the appearance of traditional domesticity proved to be a useful disguise for illegal activities.

Safe House Proletarskaia Revoliutsiia Krupskaia Vospominaniia Stvo Politicheskoi Literatury
These keywords were added by machine and not by the authors. This process is experimental and the keywords may be updated as the learning algorithm improves.

I was born on 7 October 1907 […], as my mother’s fourth and last child. […] Father was hiding from the police in Finland . There was, of course, no way of reaching him—but just then a Menshevik from Moscow , Vasilii Sher, appeared unannounced on the doorstep, on the run from the Moscow police. Mother immediately dispatched him to Finland , to find my father and tell him the glad news. No sooner had he departed than an unknown comrade arrived from Moscow just too late to inform him that his own wife too had just given birth to a daughter.