American National Security and Civil Liberties in an Era of Terrorism 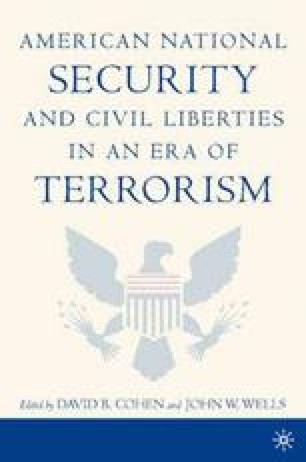 The Needs of the Many: Biological Terrorism, Disease Containment, and Civil Liberties

Although in the minds of most Americans the 9/11 terrorist attacks signified a watershed event in American history, the less well-remembered anthrax attacks of autumn 2001 represent an omen of potentially more devastating bioterror threats on the American horizon. In an unprecedented bioterrorist attack, letters containing a powder composed of Bacillus anthracis (anthrax) were dropped in a mail depository in New Jersey and sent to the corporate offices of the Sun tabloid in Florida, the New York Post, the offices of CBS News anchor Dan Rather, NBC News anchor Tom Brokaw, and the U.S. Senate offices of Tom Daschle (D-SD) and Patrick Leahy (D-VT).1 In the wake of these attacks, five individuals were dead, including a photo editor at the Sun two postal workers in Maryland, a hospital supply worker in New York City, and a ninety-four-year-old woman in Connecticut. The latter four deaths resulted from mail that was cross-contaminated by the packages bearing the anthrax bacterium or because the victims worked in a mail-sorting facility in which the contaminated mail was processed. Seventeen others were treated for anthrax-related illness, Congress shut down, the U.S. mail system was in disarray, and millions of dollars were spent cleaning up federal buildings contaminated with anthrax spores.2 A mild panic ensued within the country as public health authorities and physicians were besieged with requests from patients for information about anthrax as well as antibiotics that would protect them from the bacterium.3 As of this writing, the perpetrator(s) of America’s first major act of biological terrorism are unknown and remain at large.4

The liberty secured by the Constitution of the United States to every person within its jurisdiction does not import an absolute right in each person to be, at all times and in all circumstances, wholly freed from restraint. There are manifold restraints to which every person is necessarily subject for the common good…. Real liberty for all could not exist under the operation of a principle which recognizes the right of each individual person to use his own [judgment], whether in respect of his person or his property, regardless of the injury that may be done to others.