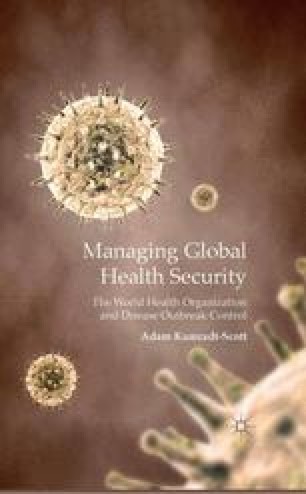 As government officials met in Geneva at the 58th WHA to endorse the revised IHR (2005), alarm was mounting that the world confronted an imminent new menace. The emergence and progressive spread of the highly lethal H5N1 avian influenza ‘Bird Flu’ virus from 2004 onwards had captured the international community’s attention. It had also directly fed into the ‘threat’ from the emerging and re-emerging infectious diseases narrative that had been actively promoted since the 1990s — and in the particular case of influenza — that the world was ‘overdue’ for another pandemic. Ultimately however, Bird Flu did not become the etiological agent for the first influenza pandemic of the new millennium. Rather, it was another novel strain of H1N1 influenza (A) usually found in pigs that was first identified in a small Mexican village in 2009 that achieved human-to-human transmission and spread around the world.

Member State H1N1 Pandemic World Health Report Pork Product Disease Eradication
These keywords were added by machine and not by the authors. This process is experimental and the keywords may be updated as the learning algorithm improves.
Download to read the full chapter text