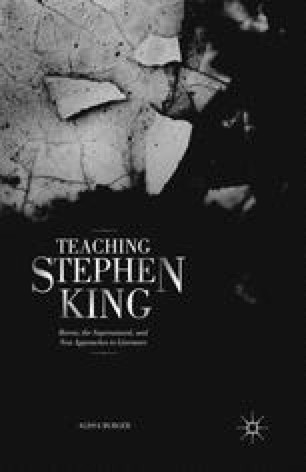 The “Thing Without a Name”

In addition to vampires and werewolves, King’s work features a host of other monsters. In The Tommyknockers (1987), Dreamcatcher (2001), and Under the Dome (2009), a monstrous alien presence threatens the humans who encounter it. In Cujo (1981), the real-life horror of a rabid Saint Bernard is compounded with the intertwining supernatural horrors of the bogeyman in Tad Trenton’s closet and the dark legacy of Frank Dodd, a serial rapist and murderer whose crimes terrified the community years before, a story which is told, in part, in The Dead Zone (1983). King’s IT (1986) is the monster story on an epic scale, with the horror that stalks Derry taking on myriad faces and disguises, from Pennywise the clown to a giant bird and popular culture staples like the werewolf and the Creature From the Black Lagoon. However, the monster is perhaps most terrifying of all when it has been brought to life by the hand of man, through human machination rather than supernatural or cosmic means.

Cell Phone Emphasis Original Burial Ground Zombie World Serial Rapist
These keywords were added by machine and not by the authors. This process is experimental and the keywords may be updated as the learning algorithm improves.
Download to read the full chapter text

Cite this chapter as:
Burger A. (2016) The “Thing Without a Name”. In: Teaching Stephen King. Palgrave Macmillan, New York