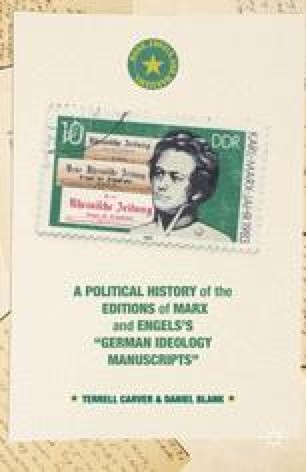 Summary, Conclusions, and Ideas on How to Publish the So-Called “German ideology” Manuscripts in Future

If one looks back over 90 years of the political history of the editions of The German Ideology, it becomes clear that this history is far from over. Neither the history of editions nor the political history of such editions has yet come to an end. On the one hand, many of the most fundamental editorial problems have not yet been solved. This is particularly true for the so-called Feuerbach manuscripts. Although the seven independent fragments of the “first chapter” of what is now known to us as The German Ideology have been presented separately and within themselves in chronological order (I/5-3 to I/5-9), the editors of the Marx-Engels-Jahrbuch 2003 edition were still presenting, even in a deconstructed form, a Feuerbach chapter. This is because the editors did not place certain text fragments, which had been written between February and the middle of April 1846 (“Das Leipziger Konzil” and “II. Sankt Bruno”), in correct chronological order among the seven independent fragments of the “first chapter” (see chapter 8). Such grave editorial inconsistencies will have to be overcome in any future edition.

Political History Text Fragment Text Rendition Future Edition Broad Readership
These keywords were added by machine and not by the authors. This process is experimental and the keywords may be updated as the learning algorithm improves.
This is a preview of subscription content, log in to check access.

Cite this chapter as:
Carver T., Blank D. (2014) Summary, Conclusions, and Ideas on How to Publish the So-Called “German ideology” Manuscripts in Future. In: A Political History of the Editions of Marx and Engels’s “German ideology Manuscripts”. Marx, Engels, and Marxisms. Palgrave Macmillan, New York