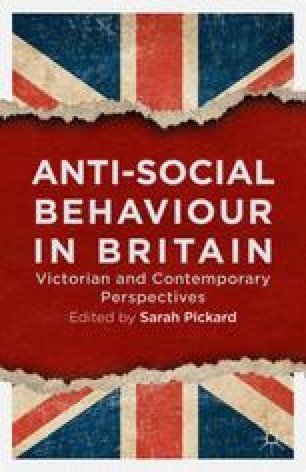 From Scurrilous Periodical to the Public Platform. Policing Blasphemers and Anti-social Behaviour: Constructing the Public Peace Then and Now

Policing blasphemy and blasphemers has caused problems for various forms of authority since time immemorial. It combines the conflicting imperatives of controlling anti-social behaviour, public order, protection of the peace and the lasting concerns of individuals having rights to freedom of expression. While the imperatives of the first two conceptions have been fundamentally important in Europe since medieval times, the issues associated with the second two have only emerged with any serious and lasting impact since the Enlightenment. Although the Reformation heightened the urge and aspiration among authority to establish behavioural conformity around the subject of religion, it was later developments that cemented the significance of this. Thus, this chapter is an assessment of how the uneasy balancing act between anti-social behaviour/public order and freedom of expression has been managed by policing authorities over the ‘long nineteenth century’ (1790–1920). When we turn to the recent contemporary history of blasphemy public order concerns remained paramount in the considerations of this issue by the House of Lords Select Committee of 2003. Thereafter, the arrival of incitement to religious hatred laws confirmed, more firmly than ever before, the primacy of public order approaches to the policing of blasphemy’s anti-social potential. From this it emerges that, not altogether surprisingly, policing regimes understand public order imperatives and appreciate their importance to a much greater extent than more abstract concerns around freedom of expression.

Civil Servant Free Speech Public Order Moral Evil Christian Doctrine
These keywords were added by machine and not by the authors. This process is experimental and the keywords may be updated as the learning algorithm improves.
This is a preview of subscription content, log in to check access.