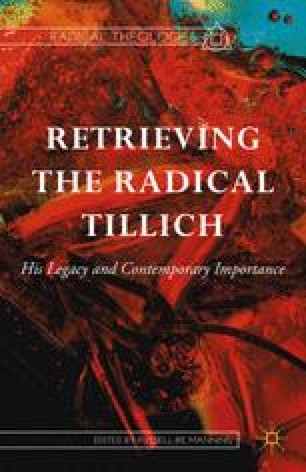 God Is a Symbol for God

Given the title of this chapter, the reader could be forgiven for assuming that my claim here is going to be that Paul Tillich lays out the a priori conditions of the possibility of any radical theology whatsoever. But, of course, that would hardly be in the spirit of the many anti-foundationalist endeavors that go under the heading “radical theology.” My claim instead is a much more modest one—namely, that Tillich does an exemplary job of covering the bases in surveying what God-talk in the contemporary West is all about. Thus, almost any attempt at a radical theology can be discussed in Tillichian terms, or at least played off of Tillich’s perspective, without wholly misunderstanding that theology and in a fashion that provides useful theological insights.1 I identify the heart of Tillich’s mature theology with his claim that “God is [a] symbol for God.”2 Just how that formula illuminates the way in which radical theology is done will be revealed in stages by juxtaposing the formula with various radical theological undertakings.

Traditional Theism Religious Symbol Psychological Challenge Ultimate Concern Polar Element
These keywords were added by machine and not by the authors. This process is experimental and the keywords may be updated as the learning algorithm improves.
This is a preview of subscription content, log in to check access.