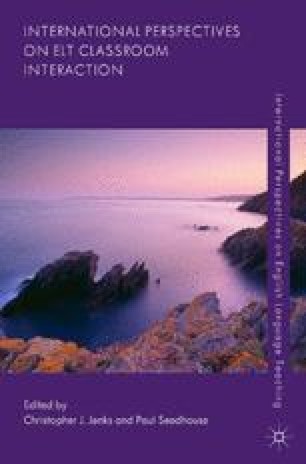 This chapter investigates how students of different nationalities manage language and multimodal resources in an English Language Teaching (ELT) classroom. The students are 13–14 years of age, and attend the European School of Luxembourg, an international place of education. The European School of Luxembourg primarily enrols children of parents working in European institutions, but also accepts other European and non-European children whose parents work in Luxembourg. European schools’ principles are based on the European Union’s perspective on education, which values the home country, the home language, and the languages of the European region (Ziegler et al. 2013) – this is in line with the European Union motto: ‘United in diversity’. According to these principles, the European School is a multilingual place of education in a unique social-geographical space that empowers individual plurilingual practices (Ziegler 2011). It is worth nothing that Luxembourg has three official languages (Luxembourgish, German, and French), and 44.5 per cent of the population is of other nationalities besides Luxembourgish (Statec 2013). The findings of this chapter reveal how multiple languages can coexist in an ELT classroom situated in a European international space.

Target Language Word Search English Language Teaching Iconic Gesture Interactional Organisation
These keywords were added by machine and not by the authors. This process is experimental and the keywords may be updated as the learning algorithm improves.
This is a preview of subscription content, log in to check access.