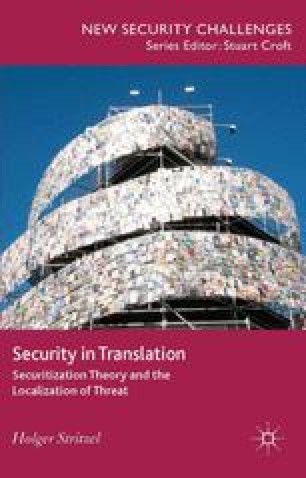 Securitization Theory and the Copenhagen School

Securitization was developed by the Copenhagen School of Barry Buzan, Ole Wœver, Jaap de Wilde and others, so called because most writings emerged at the Conflict and Peace Research Institute (COPRI) in Copenhagen in the 1990s. The concept of securitization is currently still most fully developed in Security: A New Framework for Analysis (1998), which, however, draws upon earlier reflections by Waever in Securitization and Desecuritization (1995), Concepts of Security (1997) and a number of unpublished manuscripts including Security, the Speech Act (1989a) (see also Waever, 2003). In the meantime, the concept has also been explicated and transformed by various critics of a ‘second generation’ of securitization scholarship (see in particular Balzacq, 2011; Vuori, 2008; Stritzel, 2007; 2012; Floyd, 2010) and applied to numerous specific perceived security problems ranging from migration and the environment to cyberthreats. Theoretical discussions have so far largely been focused on several single aspects of the idea/theory, including the role of identity/identification (McSweeney, 1996; 1998; 1999), bureaucratic routines (Huysmans, 2006; Bigo, 1996; 2000; 2002), ethics (Aradau, 2004; Floyd, 2007), agency and discourse (Stritzel, 2007; 2012), non-articulations/silence (Hansen, 2000), illocution versus perlocution (Balzacq, 2005; Vuori, 2008), audience (Balzacq, 2005; Léonard and Kaunert, 2011), securitizations in non-democratic environments (Vuori, 2008), and images and visual language (Williams, 2003; McDonald, 2008; Hansen, 2011; Vuori, 2010b).

National Security Illocutionary Force Security Study Felicity Condition Security Practice
These keywords were added by machine and not by the authors. This process is experimental and the keywords may be updated as the learning algorithm improves.
This is a preview of subscription content, log in to check access.