Assessing the Open Method of Coordination 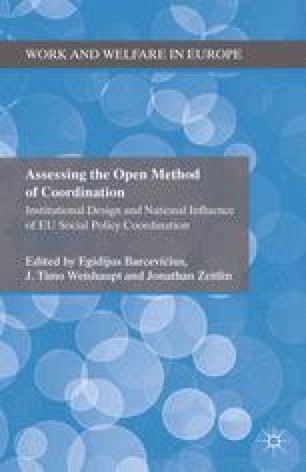 Assessing the Open Method of Coordination pp 16-39 | Cite as

Tracing the Social OMC from Its Origins to Europe 2020

The European integration process has long been described as ‘asymmetrical’, prioritizing economic over social objectives (Scharpf 1996). Although it is certainly true that market-making ‘negative integration’ has made remarkable strides, the European integration process has always had a social dimension. Already the Messina Declaration signed in 1955 laid the foundation for the European Community to regulate various social issues (including, for instance, the mobility of workers) and to provide funding for social concerns, including labour market training, through the European Social Fund (ESF). The commencement of the Social Action Programmes in 1974 was a political confirmation that the member governments perceived social aims as an integral part of European integration (Faikner 2010).1 Only in 1989 did the European Community adopt — albeit without the UK — the Community Charter of the Fundamental Social Rights of Workers, which is often identified as a political ‘turning point’ for EU social policy (Pochet 2005). This Charter outlined a common labour law model (for example, the right to strike), gender equality, and anti-poverty programmes, while affirming in its preamble that ‘the same importance must be attached to the social aspects as to the economic aspects, and […] they must be developed in a balanced manner’ (cited in O’Connor 2005).

Social Inclusion Social Protection European Council Child Poverty European Community Household Panel
These keywords were added by machine and not by the authors. This process is experimental and the keywords may be updated as the learning algorithm improves.
This is a preview of subscription content, log in to check access.