Youth Cultures in the Age of Global Media 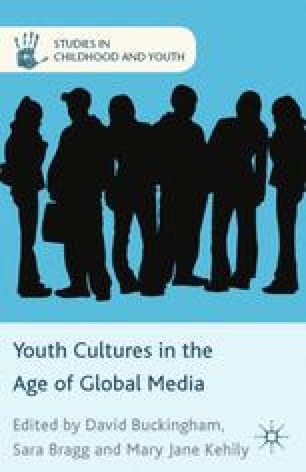 Learning to Act Your Age: ‘Age Imaginaries’ and Media Consumption in an English Secondary School

In this chapter I explore the relationship between ‘age imaginaries’ and media consumption in an English secondary school I have called Lakefield School. I argue that the concept of age imaginaries is valuable for understanding how both students and teachers negotiate multiple notions of age while in school. In the ethnographic examples presented here, age is imagined within the realms of youth, growing up and adulthood; but these categories emerge concurrently, rather than being necessarily mutually exclusive. This has significant implications for research into ‘youth cultures’ because it undermines the fixity that this term and other age-based markers of identity often imply. I also argue that media consumption is an important means for negotiating these multiple, concurrent imaginings of age. I begin by explaining the concept of ‘age imaginaries’ and then situate this concept, and my arguments about the role of media consumption in imagining age at school, within a broader ethnographic context. In the second part of this chapter I consider ethnographic vignettes from Year 11 (age 15–16) Media Studies lessons at Lakefield School. I conclude by arguing for the value of age imaginaries in understanding ‘youth’ culture and media consumption. The ethnographic vignettes presented here are particularly revealing in terms of what they show about how ‘youth’ culture and media consumption are negotiated in creative and surprising ways within the context of secondary education — a space normally imagined in the literature on youth culture as the restrictive institutional opposite to more romantic, supposedly ‘free’ locations for media consumption, such as the street, the club or the bedroom.

Medium Study Social Networking Site Media Consumption Tutor Group Youth Culture
These keywords were added by machine and not by the authors. This process is experimental and the keywords may be updated as the learning algorithm improves.
This is a preview of subscription content, log in to check access.