Indians, Environment, and Identity on the Borders of American Literature 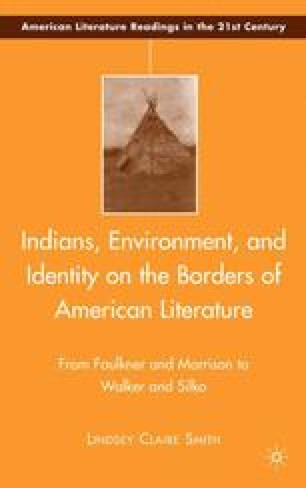 Indians, Environment, and Identity on the Borders of American Literature pp 109-144 | Cite as

Challenging accepted notions of identity, studies of black Indians in history and culture are particularly relevant to explorations of contact and amalgamation across racial, cultural, and national borders in the Americas. The historical alliance of blacks and Indians takes on explicit personal, environmental, feminist, and spiritual significance in the works of Alice Walker. Walker bases many of her culturally hybrid characters on accounts of leaders of black Indian communities that, according to William Loren Katz, afforded women more rights than were common in European cultures, often elevating women to positions of leadership (12). Jonathan Brennan also describes ways in which Seminoles created a unique African-Native culture more readily than other tribes, exemplifying “culturally and racially mixed communities” in which “distinctions between African and Native began to blur” (7–10). In addition, Katz relays the legacies of Seminole leaders in Florida, who, unlike other Southern tribes, resisted adoption of slavery and accepted various groups of American Indians and Africans, allowing them to establish independent villages within the community that were based on rice farming practices of Sierra Leone and Senegambia (50–2). Osceola, Wild Cat, and John Horse, the most legendary Seminole leaders, led resistance to U.S. efforts to impose slavery on the tribe and remove them to Indian Territory, and Walker draws on their efforts as inspiration for several of the visionary individuals in her fiction.

Indigenous People African American Woman Natural World Black People Burial Mound
These keywords were added by machine and not by the authors. This process is experimental and the keywords may be updated as the learning algorithm improves.
Download to read the full chapter text