American Ascendance and British Retreat in the Persian Gulf Region 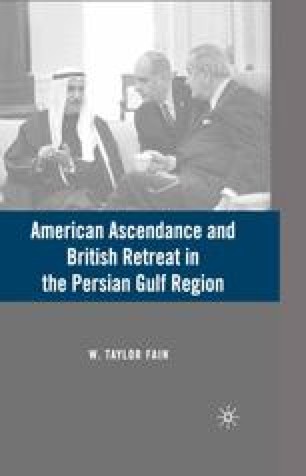 On January 25, 1954, the British ambassador to Washington, Sir Roger Makins, wrote to the foreign secretary, Selwyn Lloyd: “There is on our side a very understandable impression,” he noted, “that the Americans are out to take our place in the Middle East. Their influence has greatly expanded there since the end of the Second World War, and they are firmly established as the paramount foreign influence in Turkey and Saudi Arabia. … Are the Americans consciously trying to substitute their influence for ours in the Middle East? And, even if this is not their conscious policy now, is it nevertheless the inevitable conclusion of the present trend of events?”1 In a few deftly penned sentences, Makins, formerly a deputy undersecretary in the Foreign Office with special responsibility for Middle Eastern questions, succinctly captured the anxiety within the British foreign policy-making establishment, as it struggled to secure Britain’s interests in the Persian Gulf and in Arabia and to define its diplomatic relationship with Washington during the early 1950s.

Saudi Arabia Middle East Arabian Peninsula Arab World Suez Canal
These keywords were added by machine and not by the authors. This process is experimental and the keywords may be updated as the learning algorithm improves.
This is a preview of subscription content, log in to check access.