Desire and Gender in the Sonnet Tradition 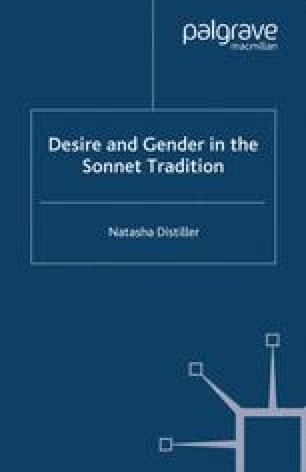 The contention that the English Petrarchan subject was initially gendered male makes sense only when the early modern sonnet is placed in its socio-historical context. We can track the development of a speaking subject who, while not a crude master or wielder of power (himself subject to a powerful authority), still depends on an Ideal object to launch himself into language. That this object is most often female is not the last word about the sum total of the Petrarchan subject and its object relations. Rather it is reflective of the constitutive roles of already-existing gendered relations that Petrarchism in turn both helped to propagate and offered the tools to critique (rather, it might be said, like psychoanalysis). The self-other or subject-object relation within Petrarchism does not need to set simplistic terms of male aggression and female victimhood. By insisting that the subject requires, is in some way constituted by, its object, we can recognise that the object’s necessity imbues it with specific kinds of power of its own which makes it more than abject (see de Grazia et al. eds. 1996; Dollimore 1991: 24). Female subjects in the Petrarchan Symbolic also have to engage with the genre’s subject-object relation, and they often do so in ways that reveal the system of domination out of which they are struggling to emerge, as we will see from Chapter 4 onwards.

Sixteenth Century Woman Writer Henry VIII English Poetry Literary Canon
These keywords were added by machine and not by the authors. This process is experimental and the keywords may be updated as the learning algorithm improves.
This is a preview of subscription content, log in to check access.