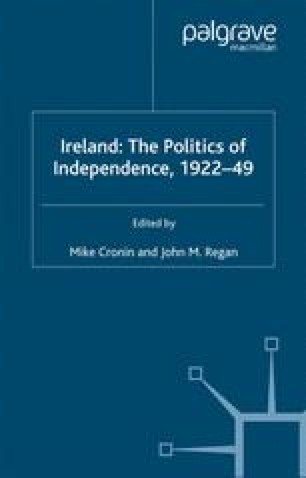 The Enigma of Fianna Fail: Party Strategy, Social Classes and the Politics of Hegemony

During the 1997 general election campaign in Ireland, the deputy leader of Fianna Fáil, Mary O’Rourke, told a seminar on unemployment organised by the Irish Congress of Trade Unions that her party had more in common with the Labour Party on the question of unemployment than it had with its prospective coalition partners, the Progressive Democrats. Flatly rejecting the Progressive Democrats’ proposals to shed 25 000 jobs in the public sector, she projected Fianna Fáil as the defender of the public sector.¹ Her remarks were, of course, a classic example of Fianna Fáil tactics and rhetoric . By ‘muddying the waters’ of those who sought to portray the election as a contest between a centre-left rainbow coalition and a centre-right Fianna Fáil– Progressive Democrats alignment, she emphasised Fianna Fáil’s ability to face both ‘left’ and ‘right’ simultaneously. The statement indicated to the trade union movement that Fianna Fáil, which has continued to win more working-class votes than the Labour Party and Democratic Left combined, understood the economic concerns of both the unemployed and public sector worker components of its cross-class electoral bloc. Thereby setting limits to the extent to which that cross-class electoral bloc would be endangered by the pursuit of orthodox economic

Political Party Labour Party Conservative Party Latin American Populism Trade Union Movement
These keywords were added by machine and not by the authors. This process is experimental and the keywords may be updated as the learning algorithm improves.
This is a preview of subscription content, log in to check access.