The Palgrave Concise Historical Atlas of the Second World War 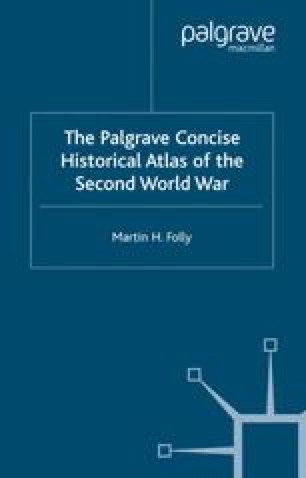 The secret protocol of the Nazi-Soviet Pact divided Eastern Europe into German and Soviet spheres of interest. The Soviets began immediately to act upon this agreement, which, Stalin said, had ‘been sealed with blood’. Stalin proceeded to force ‘mutual assistance’ pacts on Latvia and Estonia, under which he could station Soviet troops on their soil. Lithuania had been assigned to Germany, but under the German-Soviet Border and Friendship Treaty of 28 September, it was exchanged for German occupation of a larger part of Central Poland up to the Bug river and the Suwalki area, and it too was forced into such a pact. Stalin pressured his other neighbours Romania and Turkey, and also Bulgaria, for similar arrangements. Whether these moves were opportunistic expansionism or defensive responses to German expansionism is disputed. The likelihood is that they were both, as Stalin felt insecure about any areas not under his control. He preferred to deploy his troops right up to the frontier of a potential enemy.

Mutual Assistance German Occupation Potential Enemy Opportunistic Expansionism Soviet Expansion
These keywords were added by machine and not by the authors. This process is experimental and the keywords may be updated as the learning algorithm improves.
This is a preview of subscription content, log in to check access.