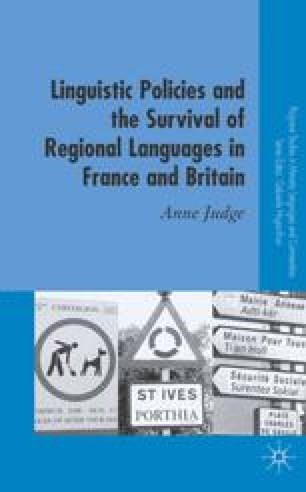 The reason for making the distinction between RLs which are official or not official elsewhere is that this alters profoundly the dynamics of the problem. This chapter examines those languages which do not benefit from being official elsewhere. They include Breton, Corsican, Franco-Provençal, Occitan and the langues d’oïl. This does not mean that none of these are spoken on the other side of the French border. In some cases they are but without having an official status. In a few cases, they do have official status but the number of speakers is so small as to have no significant impact on the RL as spoken in France. Thus the fact that Occitan is the official language of the Val d’Aran is pleasing but does little to help Occitan in France.

Minority Language Thirteenth Century Ninth Century Regional Language French People
These keywords were added by machine and not by the authors. This process is experimental and the keywords may be updated as the learning algorithm improves.
This is a preview of subscription content, log in to check access.

Cite this chapter as:
Judge A. (2007) Regional Languages Not Official Elsewhere: Breton, Corsican, Franco-Provençal, Occitan and the Langues d’oïl. In: Linguistic Policies and the Survival of Regional Languages in France and Britain. Palgrave Studies in Minority Languages and Communities. Palgrave Macmillan, London. https://doi.org/10.1057/9780230286177_7