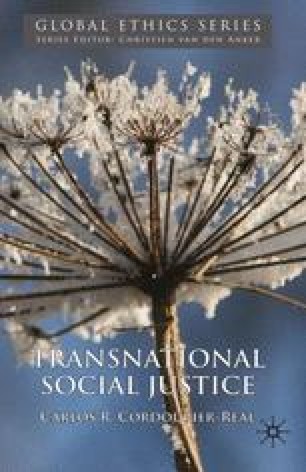 One of the most important debates in post-Rawlsian philosophical reflection focuses on the limits or boundaries of our obligations of justice. As a good initial approach to the discussion, we can say that the debate deals with the question: do we have obligations of justice towards non-members of our political community? Or, somewhat rephrased along Rawlsian lines, what is the scope of the application of the principles of justice? The theoretical dispute has been explored by two major traditions of moral and philosophical thought that are widely referred to as ethical universalism and ethical particularism. In a nutshell, particularist thinkers argue that membership in a community (be this political or ethical) – as well as our particular relationships (for example, family or friendship) – determine the existence and content of our moral obligations; universalists30 instead claim that boundaries and contingent factors of the moral personality, such as our cultural membership, our place in history, our personal attachments, or the relationships we are embedded in, are morally irrelevant to determine the existence of duties. Likewise, whereas universalists advance moral impartiality (this is a significant coincidence between consequentialist and deontological ethics) as a condition of morality, particularists reject impartiality and claim that it is repudiated thoroughly by common-sense morality.

International Society Distributive Justice International System Severe Acute Respiratory Syndrome Normative Framework
These keywords were added by machine and not by the authors. This process is experimental and the keywords may be updated as the learning algorithm improves.
Download to read the full chapter text