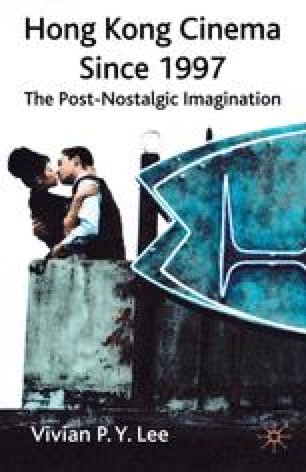 In Chapter 4, we have seen how Johnnie To and his Milkyway Image team seek to articulate and transcend the perceived crisis of identity through a post-nostalgic engagement with local cinematic conventions, and thereby redefine action and heroism in terms of theatricality, stasis, and conflicted psychological states of morally and/or physically compromised characters. To’s work replaces individualistic heroism with a flexible group ethic that, in its darkest manifestation, eliminates the hero (e.g. in Mad Detective). This chapter takes a closer look at the pathology of heroism in the light of an emerging trend in Hong Kong’s action cinema, that is, the obsession with memory1 and the failure of memory to access or understand the real, resulting in a dramatic change in the figure of the action hero, usually a cop or a cop-like character with similar attributes. This trend can be traced back to relatively less commercially successful films prior to 1997; however, films embracing certain alternative traits of the hero seem to have gained a much firmer foothold in mainstream cinema in the last six or seven years. Immediate precedents to Mad Detective can be found in several high concept productions, for instance The Infernal Affairs trilogy (Andrew Lau/Alan Mak, 2002–2003), Confession of Pain (Lau and Mak, 2006), and Divergence (Benny Chan Muk-shing, 2006).

Urban Space Liminal Space Medium Shot Affective Connection Vernacular Building
These keywords were added by machine and not by the authors. This process is experimental and the keywords may be updated as the learning algorithm improves.
Download to read the full chapter text