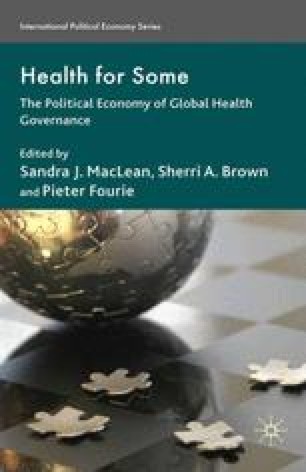 Thirty years ago, 134 representatives of member states of the World Health Organization (WHO) gathered in Alma Ata in the former Soviet Union, and drafted and unanimously adopted the Alma Ata Declaration, ‘Health for All by the Year 2000.’ The much publicized declaration called for ‘the attainment by all citizens of the world by the year 2000 of a level of health that will permit them to lead a socially and economically productive life’, and the cornerstone of achieving health for all, the implementation of a broad-based primary health care vision. What happened next? Certainly some gains in some places were made. But, in the 3 decades that followed, the governance of global health shifted away from the state and World Health Organization (WHO); first toward the World Bank (WB), whose 1993 report Investing in Health signalled its growing interest in global health policy. Over the years a much broader network of state and non-state actors — civil society organizations and the G7/G8 — have taken on a more important role in the governance of global health. As neoliberal policies of structural adjustment eroded public health care systems, the discourse of Primary Health Care was replaced with that of economics (cost recovery, willingness to pay, technical efficiencies, opportunity costs); single-disease, vertical interventions became more fashionable, and the understanding of health as a basic right gave way to health as a commodity provided by the market, poor health increasingly disengaged from its social and political roots.

Global Health Foreign Policy Avian Influenza Human Security Child Soldier
These keywords were added by machine and not by the authors. This process is experimental and the keywords may be updated as the learning algorithm improves.
Download to read the full chapter text