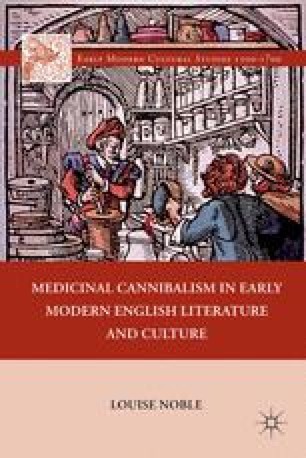 Divine Matter and the Cannibal Dilemma: The Faerie Queene and Devotions Upon Emergent Occasions

In 1567, the house of Vitus Jacobaeus published a broadsheet image of the anatomy of Martin Luther (see figure 1).4 The image, which depicts the dissection of Luther’s corpse, the eating of his flesh, and the drinking of his blood, brings together early modern corpse pharmacology and the Reformation debate about the true nature of the Eucharist in a tableau of cannibalism. Such an evocative representation of corporeal associations raises the question that underpins this chapter: is there a discursive overlap between the medical ingestions of corpses and the denial of the Eucharist as corporeal matter that reveals a residual Protestant hunger for the real flesh and blood of Christ? In this anti-Reformation portrait of a public anatomy, Luther’s body, lying like that of an executed criminal on the anatomist’s table, is tortured, dissected, dismembered, and his blood drunk and flesh eaten by his followers—a group that includes other influential Reformers such as Calvin, Zwingli, Viret, Brenz, and Melanchthon. Significantly, although the act of cannibalism is just one of several atrocities the image represents, it dominates and thus controls interpretation of the scene. One of Luther’s legs, still attached to his body, is being eaten, and the long sweep of the raised leg draws the viewer’s eye upwards, to be arrested at the open mouth of the eater chomping down on Luther’s foot.

Catholic Priest Late Sixteenth Real Presence Human Corpse Colonial Discourse
These keywords were added by machine and not by the authors. This process is experimental and the keywords may be updated as the learning algorithm improves.

Hereunto D. Smith first answered, that it was no horrible, nor wicked thing to eat mans flesh, since we usually eate it in Mummy. What, said M. F. not the flesh of a live man?

Daniel Featley, The Grand Sacrilege of the Church of Rome1

The divine flesh, transmitter of abstract, impalpable powers that put the soul into communication with the ineffable, was also widely perceived as a mysterious, superhuman nourishment, a sort of divine marrow that would mete out both health and salvation (the two are indistinguishable in the single, ambiguous term salus). It was seen as a heavenly manna and balsam, a supernatural pharmakon—the “salubrious elixir vitae of His blood.”

But for the Sovereign Remedy of all,

The Only, never-failing Cordial;

There ’tis upon That Shelf: That Composition

Th’Assembly Took, it self, in my Condition.

The Tears of Widows, Orphans Hearts, and Blood

To auspicate their Moloch Reformation.

Roger L’Estrange, The Committee; or Popery in Masquerade3