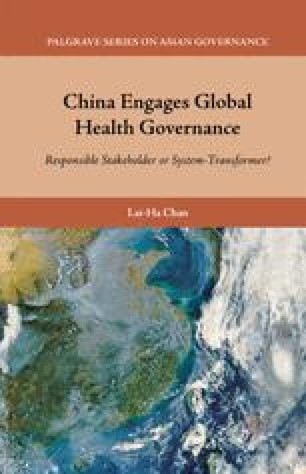 This study arose from China’s puzzling engagement with global governance in general and with global health governance in particular. Two issues are at the forefront. First, conventional wisdom has claimed that China did not address its looming HIV/AIDS problem until the devastating SARS crisis of 2002–3. China’s response to its ailing public health governance is seen as a reactive rather than proactive action to a full-blown crisis. However, this research demonstrates that was not the case. It finds that China’s HIV/AIDS policy began to shift well before the shocking SARS outbreak, with June 2001 being the watershed moment of China’s HIV/AIDS policy, when the central government openly admitted the problem of the pandemic inside the country. Hence, several questions have emerged: why did the Chinese government initiate tackling HIV/AIDS after covering it up for more than fifteen years? Since then, why has it used a multilateral approach to deal with it? What is the nature of its multilateral approach? How does China’s record of compliance or noncompliance with the international health regime reveal the reasons for and limitations of its participation in global governance?

Global Governance World Order International Order National Sovereignty Global Public Good
These keywords were added by machine and not by the authors. This process is experimental and the keywords may be updated as the learning algorithm improves.
Download to read the full chapter text