Gender and Sexuality in 1968 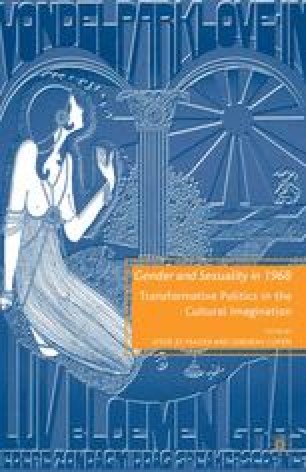 “Out Now!”: Antimilitarism and the Politicization of Homosexuality in the Era of Vietnam

Since the 1970s, commentators on the history of sexuality (following the lead of Michel Foucault) have written extensively on the emergence of “the homosexual” as a clinical category and social type in the North Atlantic West. In contrast, there has been little academic inquiry into the more recent emergence of other identity-naming keywords such as gay, straight, and queer. The mode of cultural studies invites us to view even our most contemporary-sounding categories as both ideologically conditioned and historically contingent. The full spectrum of meanings covered by these identity-naming keywords is sometimes easy to read, as it is in present-day usage of the once pejorative queer—a term that has now come to be associated not only with a heavily politicized field of antihomophobic academic discourse, but with the self-conscious adoption of an antagonistic stance toward “mainstream” culture. Less easily perceptible today, thirty years after Gay Liberation, is the palpable ideological force-field that once surrounded (and to some extent, continues to surround) the signifier “gay.” This chapter insists on the centrality of both the Vietnam War experience and the antiwar movement to the emergence of the Gay Liberation movement in the United States. Situating Gay Liberation squarely in the context of the Vietnam years not only helps explain the force with which gay people emerged after 1969 as an assertively identity-affirming community and aboveground interest group.

Sexual Identity Sexual Politics Draft Board Antiwar Movement Lesbian Feminist
These keywords were added by machine and not by the authors. This process is experimental and the keywords may be updated as the learning algorithm improves.
This is a preview of subscription content, log in to check access.