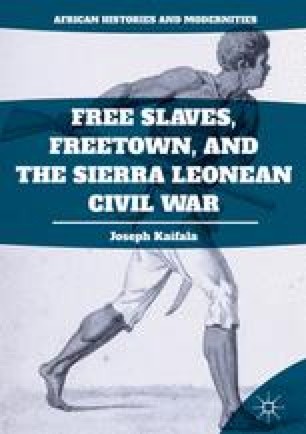 This chapter covers relations between the Freetown colony and the Sierra Leone Protectorate, which included British areas outside Freetown. The chapter focuses on the Hut Tax War of 1898, when Protectorate chiefs declared war against the British for imposing taxation on their territories. Governor Cardew wanted to improve the economy through taxation, but he failed to properly explain his motives to locals who had little knowledge of an economic system in which citizens paid taxes. Chief Bai Bureh, the main protagonist of the uprising, later surrendered and was sent into exile. A British Commission concluded that the Hut Tax “was obnoxious to the customs and feelings of the people…” especially because the British offered no incentives to make the people accept the tax.

Fiscal Policy Local Ruler Slave Trade Royal Commission Colonial Administration
These keywords were added by machine and not by the authors. This process is experimental and the keywords may be updated as the learning algorithm improves.
This is a preview of subscription content, log in to check access.