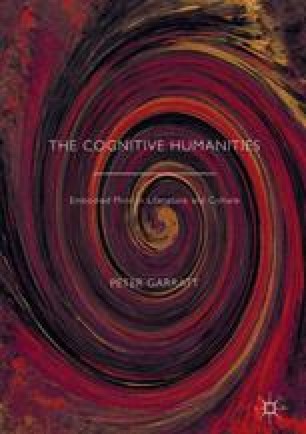 The Opacity of Fictional Minds: Transparency, Interpretive Cognition and the Exceptionality Thesis

Within cognitive science and narrative theory, the ‘transparency of the mind’ is a shared optical image to describe the accessibility of cognitive processes and phenomenological experiences. This seeming terminological convergence, however, conceals important differences and potential confusion about what is transparent to whom, or what higher or lower degrees of transparency imply in terms of accessibility. Cognitive science speaks of a transparency of the mind in at least two kinds of cognitive scenarios. One is the so-called transparency of self-knowledge or self-transparency (T1), according to which the mind is said to be transparent to itself. A second condition of transparency is in relation to outward perceptual experiences where, inversely, transparency indicates the introspective inaccessibility of phenomenal states or their ‘phenomenal transparency’ (T2). When looking at the colour blue, the classic example goes, we can just attend to the colour blue and not to the experience itself because we see through the process channelling that experience. Both assumptions have been recently disputed or substantially revisited by new strands in cognitive science, which advocate that perception and self-knowledge are instead inherently opaque. Within this alternative account of the mind, encompassing a range of perspectives that the chapter will group and present as the ‘interpretive cognition’ framework, transparency is considered just an illusory feeling resulting from the positive outcome of successful interpretive mechanisms coping with a vast array of opaque stimuli in inner cognition and outward perception. Drawing on the hypotheses raised by the ‘interpretive cognition’ framework, and especially on its reappraisal of inner transparency (T1), this chapter aims at addressing, refining and reassessing an equally recent debate in narrative theory about the transparency of fictional minds. With a particular focus on moods and introspective opacity (conditions in which the embodied, anti-Cartesian dimension of cognition is particularly relevant), the chapter uses Kate Chopin’s The Awakening (1899) as a case study to show how narrative fiction can transparently bring interpretive processes to the fore, either when this mediation is unperceived by the experiencing character or when opacity becomes perceptible to her.

Perceptual Experience Emphasis Mine Interpretive Process Bodily Feeling Narrative Theory
These keywords were added by machine and not by the authors. This process is experimental and the keywords may be updated as the learning algorithm improves.
This is a preview of subscription content, log in to check access.