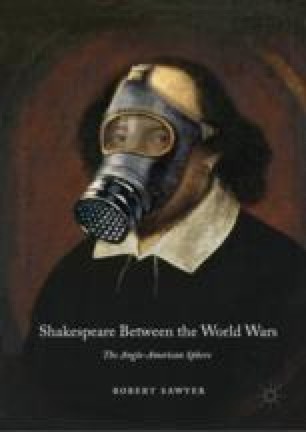 Conclusion: Transnational Shakespeare, Then and Now

This chapter is devoted to transnational trends of Shakespeare in the Interwar Period, and many of the productions, I suggest, anticipate the recent critical turn to global Shakespeares. The film version of Max Reinhold’s A Midsummer Night’s Dream, for example, serves as a predecessor to the Branagh productions, specifically the comedy Much Ado about Nothing (1993). I also consider the film of As You Like It directed by the Hungarian-born director, Paul Czinner. In a brief “Coda” entitled “The Shakespearean Sphere,” I consider the globalization and “glocalization” of Shakespeare between 1945 and the present, because it is important to consider the ways in which the “Shakespearean Sphere” has also expanded and contracted in the last 100 years.

N.B. Transnational: As mentioned in endnote 15 in the Introduction, the term “transnational” is not synonymous with “global” or even “international.” As Or Rosenboim explains, as “a political category,” the term “international attributes importance to the nation, or the state, as a defining, order-creating unit, and explores the relations between nations as sovereign entities” (The Emergence of Globalism: Visions of World Order in Britain and the United States, 1939–1950 [Princeton: Princeton University Press, 2017]: 4). The term “transnational space,” which I’m focusing on first, “stretches beyond national boundaries to explore interconnections across borders, without undermining the significance of national communities and states” (4). The term “globalism,” to which I turn later, suggests an “awareness of the political significance of the globe as a unitary whole made of interconnected, diverse political units” (4).