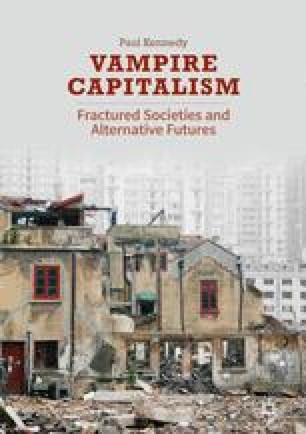 The chapter sets out the book’s central theme—that capitalism has always been riven with contradictions and conflicts that are intrinsic to its DNA: namely, the drive to create, extract and accumulate wealth in a competitive market. This, in turn, generates the relentless engine of economic growth at local, sectoral and international levels and pushes capital to overwhelm and commercialize ever more aspects of non-economic life. The chapter then explains the nature of the post-Enlightenment ‘partnership’ between capitalism and modernity and the nation-state system. It also provides an outline sketch which demonstrates capitalism’s impressive history of adaptability and innovation in the face of constant technical, political and economic crises and transformations and its formidable capacity to develop the productive forces helped by science and the state. However, in its present neoliberal and globalized form since the 1970s, the restraints that once enabled governments and citizens to exercise a degree of control over capitalism have loosened and even disappeared. Thus, the inherent one-dimensionality of capitalism that was always present is now rampant and underpins or is even the primary cause of three sets of events and problems of huge significance. First, it is aggravating, long-standing fractures over power, inequality and social exclusion that are deepening both within societies and between them. Second, it is inextricably bound up with the huge release and indeed intensification of ethnic, regional and sectarian conflicts that have erupted and spread since 2000 while contributing to the revival of nationalism and international rivalries—though these have additional causes. Third, neoliberal capitalism has given rise to an extreme predatory form we have called ‘vampire capitalism’ that increasingly operates in a separate economic universe from the majority of workers and citizens. The book further argues that without the implementation of major reforms to the structures of capitalism at a global level, the current post-2008 financial crisis, with its legacy of slow growth and indebtedness, will prove extremely difficult to overcome. But in addition, and without such reforms and a relative shift back to governmental and especially citizen power, capitalism and the market economy may prove to be dangerous distractions in the face of the looming worldwide problems of escalating climate change and technological unemployment—linked to robotization and artificial intelligence—and how to deal with them without collapsing into dystopic futures.

European Union North Atlantic Treaty Organization Industrial Capitalism Capitalist Modernity Syrian Refugee
These keywords were added by machine and not by the authors. This process is experimental and the keywords may be updated as the learning algorithm improves.
This is a preview of subscription content, log in to check access.