The Posthuman Body in Superhero Comics 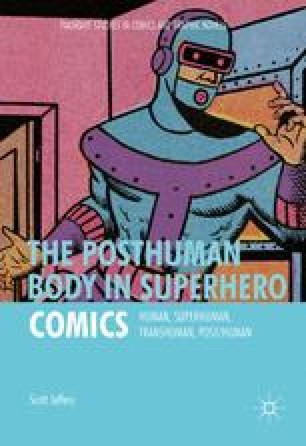 The Posthuman Body in Superhero Comics pp 1-10 | Cite as

In issue ten of All Star Superman1 the titular hero attempts to discover what a world without Superman would look like by creating a miniature universe, complete with a miniature Earth whose development he can observe from the outside. In the glimpses of this alternate Earth afforded the reader, we move swiftly from early humankind to the Renaissance thinker Giovanni Pico Della Mirandola delivering his 1486 “Oration on the Dignity of Man”, in which he stated that instead of yielding sovereignty to gods and angels we should instead “become like them”, and, “if we but will it, surpass even imagination’s greatest paragons”. Later in this Earth’s history we see the philosopher Friedrich Nietzsche writing by candlelight, “behold! I teach you the superman”. This is swiftly followed by a glimpse of the studio of Joe Shuster and Jerry Siegel (though both off-panel) at the moment they create the first comic book superhero: Superman himself.

Comic Book Human Enhancement Disability Study Disable Body Human Enhancement Technology
These keywords were added by machine and not by the authors. This process is experimental and the keywords may be updated as the learning algorithm improves.
This is a preview of subscription content, log in to check access.